Every day, visitors to the Cooper Hewitt make off with about 30 artifacts each, plucked from the glass cases and archives of the nation’s design museum. From teapots to laptops, the best examples of craft and industry are streaming out the ornate iron doors into New York’s Upper East Side. And before these visitors leave, they might even draw on the walls.

Not to worry—guards are on patrol in the gilded-age Carnegie mansion that houses the Cooper Hewitt, Smithsonian Design Museum and its curators are thrilled with the thievery and the graffiti.

In 2011, the Cooper Hewitt closed to embark on a three-year, $91 million renovation. Everything about the museum—from its brand identity to its exhibit casework—was questioned and reimagined by a team led by the visionary director appointed in 2010, Bill Moggridge, best known as the co-founder of IDEO. Sadly, he passed away in 2012, but his mantra “people learn best by doing” set the course for the groundbreaking suite of digital experiences that debuted when the museum reopened in December 2014.

Bringing the collections to life
The museum assembled a dream team to collaborate with the staff and envision the new museum experience. Pentagram designed a new identity, signage and graphics and commissioned Chester Jenkins of Village to design its custom font (free to the public); Diller Scofidio + Renfro (DSR) redesigned the visitor flow and exhibition spaces in the landmarked mansion; and Local Projects designed the constellation of interactive media that won a 2015 SEGD Global Design Merit Award.

Under Moggridge’s leadership, the museum launched Cooper Hewitt Labs, an in-house tech team whose first task was to create a digital infrastructure upon which content and services could be created and shared with the public. Seb Chan, who headed the Labs as Director of Digital and Emerging Media until recently, explains that while development teams are rare in museum organizations, “an internal group gives you some agency over the future” rather than relying on a continual parade of consultants. His team created a platform that could house and broadcast the results of a parallel effort to catalog and digitize the museum’ entire collection of more than 200,000 objects. It is this platform that brings the collection to life, both through engaging digital experiences onsite and on the museum’s robust website.

The core of the Cooper Hewitt collection consists of decorative arts acquired by the three granddaughters of Peter Cooper from the late 1890s to 1930. The treasures were amassed as a study collection for the students of Cooper Union, the industrialist’s avant-garde college for arts, architecture, and engineering.

Because the museum’s current home, Andrew Carnegie’s 1903 mansion on Fifth Avenue, had only 10,000 square feet of exhibition space before the renovation (and 17,000 after), it was a herculean but essential effort to create a virtual collection that could be seen without the limitations of physical space. In the spirit of Peter Cooper’s belief that education should be free and accessible, and through the efforts of the Labs team, Cooper Hewitt’s collections database is also publically available via their website and as a free feed to other websites by way of open-source developers’ tools.

This is a Pen
At an early concept meeting, DSR presented a bold idea that Local Projects had conceived as the center of the onsite digital experiences: “This is an interactive pen, your identity throughout the museum, getting you away from your phone and bringing you closer to design.”

Local Projects’ founder Jake Barton explains, “We wanted to create this new object—this pen—that would be a point of conversation and a point of creativity for each individual visitor.” It had to be a new device, not a smartphone app, because, as Chan says, “We’re irritated by our phones. We tolerate them because they’re awesome, but we do wish we could keep them in our pockets.” The goal of the museum experience, and of the pen itself, was to change passive browsers into active, engaged visitor-designers. As Chan is fond of saying, “Design is for doing, not just looking.”

The entire team embraced the novel invention immediately, but as Chan says with a wry smile, “The path from concept into reality was extremely tortuous.” It could have been an insurmountable challenge: to engineer a new interaction device packed with leading-edge sensors, sculpt it into a genuinely intuitive and delightful form, give it superpowers to inspire and design—and make it feel like it belongs in the nation’s design museum. Kristen Svorka, Senior Interactive Project Manager at Local Projects, shakes her head. “It was so ambitious, it still blows my mind that we would build a custom piece of hardware.”

The pen itself is as thick as sidewalk chalk and twice as long as a Sharpie. “It has a heft to it, it doesn’t go in my pocket—it’s significant,” notes Chan. On one end is a pliable, rubbery nub that acts as a stylus on the nine touch tables dotted around the museum. The other end terminates in a slant, exposing an oval surface marked with a plus sign. Touch that angled end to a plus sign you find on an object label, and you’ve added that object to your virtual collection. (Or, in a way, stolen it right off the wall.) The pen flashes three tiny lights and quivers to let you know you’ve nabbed the cherished item.

The Cooper Hewitt pen was developed in collaboration with five technology firms and manufactured by the Spanish device maker Sistelnetworks. The pen has an NFC sensor (short for Near Field Communication, via radio waves) that reads information embedded in a tiny chip in the label—called an NFC tag—and stores that information on the pen. Visitors can access anything they’ve saved on the pen by visiting a custom web address printed on their admission ticket.

But perhaps the more whimsical and familiar way to use the pen is to draw with it on the touch tables. As you enter the museum, an 84-inch, high-definition touch screen table beckons in the soft light of the Carnegies’ great hall. Streams of circular icons drift by slowly, meandering the length of the table. Each circle is a glimpse of an artifact in the collection. Paul Hoppe, Art Director at Local Projects, thinks of the stream as “sushi boats floating by—you just pick something that looks interesting” and go from there. Use the pen to pull an alluring disk toward you and the full image unfolds, along with some tools to explore and create. The Local Projects team named these personal work areas “placemats.”

On your placemat, trace the curve of Frank Gehry’s Cross Check Chair and a dozen objects with similar curves appear. Love the yellow hue of a 1970s teacup? Click on its color tag, “lemonchiffon,” and you’ll be dazzled by tableware, lithographs, wallpaper, and even an electric clock that all share that sunny shade.

The digital infrastructure created by the Labs team makes this serendipitous surfing possible, since all artifacts are tagged with metadata for sorting and searching. And Local Projects’ inviting interface makes it fun. If you’d like to try your hand at designing a lamp, a vase, or a chair, the placemat becomes a digital drawing pad with a simple set of drawing tools along with a rendered view of your design in progress as if it were featured in Metropolis Magazine.

Hoppe recalls the design process for the table interface. “We needed to optimize the table for multiple people to use it at the same time, so we created a semi-flexible layout that self-organizes to adjust for visitors as they come and go.”

Tables with touch screens of smaller sizes (32- and 55-in.) are positioned in the major permanent and temporary galleries. They feature the same stream and placemat interface, with the assortment of featured objects fine-tuned to correspond to the theme of the gallery.

Making wallpaper cool again
Tucked in a far corner of the second floor in what was the Carnegies’ nursery is the Immersion Room. And immersive, it is. A 55-inch touch table in the center of the blank-walled room offers two visitors at a time the opportunity to browse the largest collection of wallpaper in the U.S. (10,000+) and sketch their own designs, complete with repeat and offset options. With a projection system that would make an interior designer weep, visitors tap the “Go live!” button and their own designs unfurl on the walls around them.

Over the years, the museum’s wallpaper collection had been publicly derided as evidence that the institution had lost its relevance. In 2011, AIGA CEO Richard Grefé predicted its demise in Fast Company: “How long can people defend a wallpaper collection?” Where others saw stodgy scraps, Svorka and the Local Projects team saw the potential for interactivity. “The wallpaper collection lent itself to a more immersive environment,”  she notes. And social media has exploded with selfies of visitors posing in the Immersion Room, dipped head to toe in the light of their own creations. 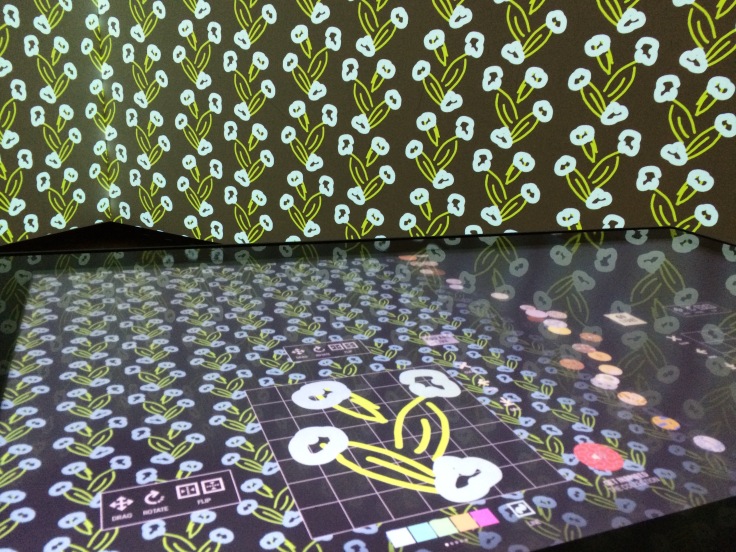 Local Projects had some very relevant experience to draw upon, specifically their suite of interactive media for Gallery One at the Cleveland Museum of Art (SEGD Honor Award, 2013—read article). One of the lessons learned was, as Hoppe says, “Most people don’t go to the museum by themselves so we put a lot of work into making these experiences flexible and inclusive. Anyone can walk up to it and understand how it works.” These playful activities spark impromptu conversations among strangers, augmenting the shared experience and mirroring the design process itself.

The pen has been in use for several months and the Labs team has been analyzing all the data it generates. Nearly all visitors choose to use the free pen when offered it at the admissions desk. On average, visitors collect about 30 objects and save one design that they created (wallpaper or a lamp, for example). On the museum website, under the “YOU” tab, visitors can learn more about the objects they saved and download their designs. About a third of visitors have visited their personal collection online after their visit. Average time spent at the museum is hovering at over an hour and a half, proving that there’s lots to do in the modestly-sized space. Along with the collection touch tables and the Immersion Room, there are interactive activities in the Process Lab that challenge visitors to rethink and improve real-world products.

Throughout the design process for the new Cooper Hewitt, Chan kept his team on point with this definition of their mission: “A ‘design museum’ sits between the art museum and the science museum. It can draw attention to the processes, choices, human decisions in the making, not just the finished object.”

Underlying the undeniable cool factor of the pen and its companion screens is the enchanting realization that the experience at the Cooper Hewitt echoes the design process itself: playful, collaborative, spontaneous, and serendipitous—with a bit of thievery and graffiti along the way.

This article first appeared on the SEGD website as “Redesigning the Museum Experience at the Cooper Hewitt” and was subsequently published in eg Magazine. (PDF).