An officer’s badge inspires a shimmering tribute to the LAPD’s fallen officers.

Environmental graphic designers are most often called upon to convey concrete information in a visual language of form and material. It is a rare assignment that asks them to articulate abstract expressions such as reverence, solemnity, and commemoration.

Our desire to consecrate places that memorialize individuals and events must be an innate one, since memorials pre-date written history. And with countless examples to draw upon, it’s difficult to sidestep clichés that have lost their emotive power from overuse and overwork.

The most compelling contemporary memorials merge a sense of place with an implicit invitation to visitors to interact within the space. Maya Lin’s Vietnam Veterans Memorial on the Mall in Washington, D.C. may be the most notable example of transforming a passive site of formal remembrance into a stirring and intimate experience, one that moves visitors to touch the stone and make pencil rubbings of their loved ones’ names.

Advancing the concept of experiential monuments, the Los Angeles Police Department’s Memorial to Fallen Officers salutes those who have died in the line of duty. The memorial was commissioned by the Los Angeles Police Foundation to be located outside the new police headquarters in the heart of the civic center. Foundation Chair Jim Wyatt called upon friend and colleague Rob Jernigan, Managing Director of Gensler Los Angeles to see whether his studio would design the memorial on a pro bono basis. The answer was a resounding yes.

Kick-start the concept
From the beginning, Jernigan and Design Director David Herjeczki realized that the LAPD memorial presented unique opportunities for their firm. As a pro bono project, the team had some autonomy to define the design process — plus, the project type itself represented an uncommon creative endeavor in Gensler’s portfolio. The project became a laboratory to test out a new cross-studio collaborative approach to kick-start the concept stage: “The methodology was fresh in that we opened up the early stage of the process to anyone who wanted to participate,” remembers Herjeczki. “An open call for design concepts generated thirty unique ideas for the memorial and broad participation from the office during a studio-wide presentation and critique.” Those designs were distilled into categories and presented to the stakeholders.

A tough crowd
Meetings with the client group included leaders of the Los Angeles Police Foundation, the Chief of Police and selected officers — what Foundation President Karen Wagoner described as “a tough crowd.” The Gensler team “learned about police culture, what is meaningful to us, and they really listened,” Wagoner recalled.

Through this inclusive and collaborative process, the Gensler team determined that the goal of the memorial was twofold: honor the sacrifice of individual officers within the context of the unity of the police force as a whole.

After a sequence of design exercises and critiques, the idea of an articulated wall composed of individual plaques became the leading concept. From afar, the wall would appear to be solid and substantial, echoing the solidarity and brotherhood of the force. As visitors approach, the true nature of the installation, and of the police force itself, would emerge: a tight-knit constellation of individuals who embody the mission “to serve and protect.”

From inspiration to fabrication
Inspired by the most iconic symbol of a police officer — the brass badge, the team selected brass as the material for the wall and component plaques. “There is nothing more sacred to cops than the badge,” affirmed Foundation president Wagoner.

The memorial wall stands 32 feet long by 12′- 3” tall. Its structure is painted aluminum, perforated to ricochet light against the many metal surfaces. Over 2,000 brass plaques jut out from both sides of the wall at random projections to create an intricate and layered composition. Each precision-cut plaque carries the name and badge number of an officer killed in the line of duty. At 15 inches wide by 2.5 inches tall, the plaques are made of 1/10- inch-thick brass plate.

To recall the unadorned nature of the officer’s badge, the Gensler team chose the font Expedition Stencil for the plaques and commissioned its designer, Steve Miggas, to customize the typeface for legibility and fabrication. He maximized the positive space in the stencil letterforms and further articulated the negative space to suit engraving limitations. “The final drawing of the face was exactly what we had envisioned, strong and powerful while honorable and approachable in its details,” notes Herjeczki.

To fabricate such a complex configuration of brass, Gensler partnered with Zahner, an engineering and fabrication company known for its metal and glass work for architecture and art installations. Making the most of Zahner’s expertise early in the project, Gensler and Zahner teams collaborated in a series of video conferences. They experimented with digital file-to-fabrication and the team was more than satisfied with the results. “Because we were involved so early with the design team, there was no push and pull — the design improved through the partnership” noted Gary Davis, Marketing Director of Zahner. 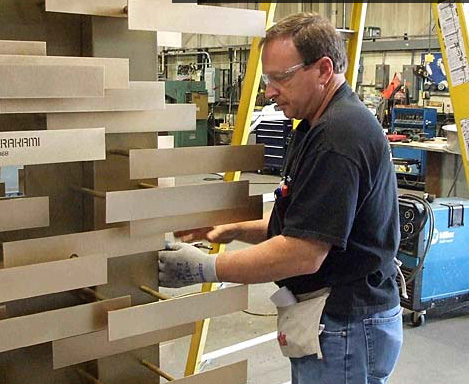 Creating a shimmering composition that reflects light from multiple directions in the sunny Los Angeles climate, the plaques are set in relief, overlapping and projecting out from the wall in an organic, random assembly. The Gensler team hoped that visitors would want to reach out and touch individual plaques to commemorate the officers’ sacrifice. Of the 2,000 plaques, 202 were engraved with officers’ names to honor the fallen officers. The design allows for additional names to be added over time. 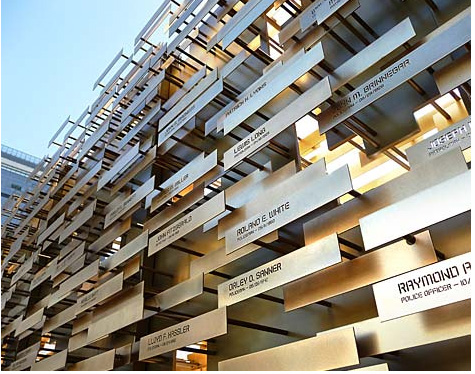 The memorial’s journey
Before the memorial even arrived for installation in Los Angeles, it had already become an expressive symbol of police dedication. The truck transporting the wall began its journey from Zahner’s headquarters in Kansas City to its destination in downtown Los Angeles accompanied by a Kansas City Police escort. When the truck reached Los Angeles, passing firefighters pulled over and turned on their lights out of respect, says Gary Davis of Zahner.

The LAPD Motor Officers accompanied the truck on its final leg. “The names on the memorial are all heroes,” said Officer Brenan Booth, a 22-year veteran of the force. “I’ve never worked on a more meaningful project” noted Foundation President Wagoner.

At the dedication in October 2009, it was evident that the moving tribute the Gensler and Zahner team envisioned had become a reality. As they watched and bagpipes played, family members of officers who lost their lives tucked white roses in the ledges of plaques and ran their fingers over the engraved names of their loved ones.

Leslie Wolke (leslie.wolke@gmail.com) is a consultant who specializes in interactive wayfinding and donor recognition systems. Based in Austin, Wolke writes about design and architecture.

Jury comments
“Powerful and well thought out use of materials and design that creates an emotional response in viewers.”

“A beautifully executed living monument to our community’s heroes.”

Badge of Honor: An officer’s badge inspires a shimmering tribute to LAPD’s fallen officers (PDF) published in segdDESIGN, no. 29, 2010